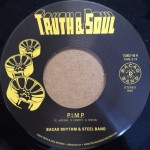 Official re-release of the infamous PIMP on Truth & Soul Records.

“Truth & Soul is proud to present the first Bacao Rhythm & Steel Band single on our imprint. Following up on the smashing success of their “Bacao Suave” b/w “Round & Round” 45 on Plane Jane, we bring you “PIMP” b/w “Laventille Road March”. Back in 2008 BRSB released it’s smashing cover of 50 Cent’s P.I.M.P. which was long thought to be the original sample for the tune. The Mocambo pressing already hard to come by and fetching top dollar on the internet has become an underground classic. On Side A BRSB treat the tune to their signature smashing drums and bass heavy production, taking the original loop and turning it into a full composition. Brass and steel pan parts putting it somewhere between reggae, steel funk, and the Superfly Soundtrack. Side B is the first BRSB original making it’s way to vinyl, “Laventille Road March” hits hard. The heavy drumming, open breaks, and pan melodies make this a sureshot for DJs and listeners alike.”