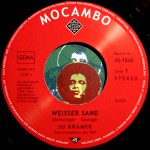 Mocambo is proud to present the official 45 release of the holy grail of European rare grooves.
With arguably the funkiest vocal delivery in German language and its killer 60-second wahwah-ladden drumbreak, Su Kramer’s “Weisser Sand” has gained legendary status among DJs and deep funk collectors.

Recorded for the pop-opera TRIP by Austrian television in Vienna in 1971, the song appeared in a dance-scene in the very musical-like TV film about a hippie guru. German label Telefunken released a promotional record of the soundtrack in very limited numbers for radio and TV stations only.
The song has since appeared on several bootlegs and compilations, using a mediocre recording off a vinyl copy and overcompressed CD mastering.

We dug a little deeper. After unsuccessful research of the original master tape at both Austrian TV archives and Telefunken, Su Kramer herself got us in touch with Peter Müller, sound supervisor and recording director of the original sessions. Not only could he give us interesting background information, he also unearthed an original tape that included an alternative version with different vocals and mix.
The musicians on the recording were, according to Peter Müller: Karl Ratzer, guitar, Richard Schönherz, keyboards, and most likely  Manuel Rigoni  on drums and George Dogette on bass. The horn section probably consisted of players from the ORF bigband. The music was written by Austrian jazz icon Fatty George, who was also in charge of the production. Silke Schwinger wrote the lyrics.

For this release, all songs were taken from best analogue source possible and carefully remastered by Michael Schütz to represent the sound of the original master in full dynamics on superior 45 format.
Included on this release is the original version of “Weisser Sand”, the never-heard-before alternative version, and the semi-instrumental “Sexsong”, from the TRIP soundtrack.

The 7inch-single release comes with a replique print of the original album artwork. The first copies are made in sand-white vinyl and handsigned by Su Kramer.