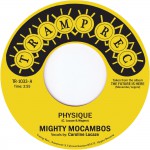 The title ‘Physique’ featuring French soul singer Caroline Lacaze was one of the stand-out tunes of the Mighty Mocambos album ‘The Future Is Here’ and a primetime club favourite for the Tramp Records crew. It was only a matter of time when this gem of French Funk would see the light as a 45 release. We gladly gave Tobias Kirmayer permission to release it on his exquisite label. On the flipside is the sinister downtempo soul instrumental ‘A Brighter Darkness’, also from the album ‘The Future is Here’, making this the 5th (!) and final 7″ release off the album. Both tracks come remastered for this 45.