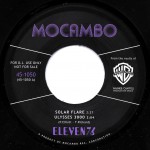 Produced by Paul Elliott, director of The Library Music Film, this promotional vinyl 45 was made to support the library album SPACE VOYAGE and to make the music available outside of film usage. Limited quantities available as most of the pressing is used as giveaway for clients in film, TV and advertising.