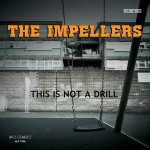 THIS IS NOT A DRILL

Mocambo records is very proud to present the original vinyl edition of long-anticipated second album by THE IMPELLERS ‘This Is Not A Drill’. The Impellers are a 10-piece heavy soul and funk powerhouse with strong original material. This new album brings together influences including heavy soul, deep funk, latin and afrobeats, hip hop production, all topped by the gritty vocals of lead singer ‘Lady’ Clair Witcher.

The Impellers first full album “Robot Legs” was released on UK independent label Freestyle Records and featured a guest appearance from DJ and latin percussion legend Snowboy. Since its release in 2009, the band have been busy touring across the UK, Netherlands, Spain, France and elsewhere. They have shared stages with some of the finest funk, soul, hip-hop, jazz and scratch DJ talent from around the world.

The vinyl edition of the LP features a heavy old-style cardboard sleeve (free of barcodes and weblinks) and includes a download code for the entire album in full AIFF quality, plus bonus tracks such as funk re-version of the instantly recognisable “That’s Not My Name” by The Ting Tings.